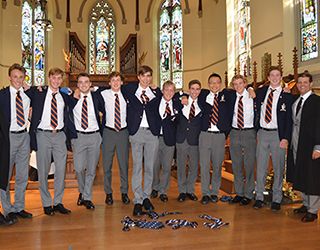 5/22/2019
Leaving the comfort of Royal St. George’s College to head off to university is both exciting and daunting for the graduating class. While most Georgians stick to schools in Canada, the United Kingdom is becoming a popular destination for our students.
University of St. Andrews in Scotland, for example, has become home for nine of our boys in the past 10 years. Aside from its stellar international reputation for both academics and student life, the Scottish University has a draw that few Canadian schools can boast: a similar feel to RSGC.

“It’s sort of similar to RSGC in the size and community,” said James Crossland, who will be attending the university in September along with fellow graduate Andrew Martin. “I would say it’s the best version of RSGC you can get in a university.”

Director of University Counselling Nick Van Herk says the draw of the College is largely because it’s a great fit for our students.

“I’ve been there and having talked to our guys who have gone there, it’s a really good combination of solid academics and a great student experience. It also has a very strong community feel, much like RSGC,” said Mr. Van Herk. “Canadian schools can’t compete with the opportunities and the experience you get from going to a school like St. Andrews. It just feels very different – it’s very much the college experience that our guys are looking for.”

Both James and Andrew are entering the International Relations program, which is one of the university’s more well-known and competitive programs. Several Georgians are either in that program currently or have already gone through it. James has known for years that it was where he wanted to go and is excited about what’s ahead.

“There are a lot of international students here and being about an hour away from Edinburgh means I’ll be able to travel easily,” said James, whose sister also attends St. Andrews. “I know I’ll have to figure out how to be more independent and will have to make sure I’m really organized, but I’m excited.”
Back