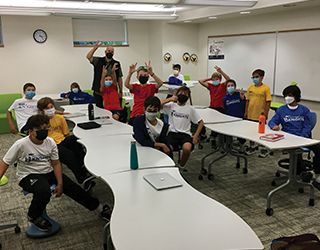 In-Person Clubs Are Back

10/13/2021
For the first time since before the 2020 March break, clubs are live and in-person again. They may be cohorted and students are wearing masks, but there is a sense of normalcy that hasn’t been felt in a long time.
Clubs are running after school or during the lunch break, with a few early morning clubs in the Junior School. And once again, there is something for everyone. The Senior School boasts favourites like Gamerz Union, Dr. Death, Environment Club, Comedy Club, Boxing Club, Gender Sexuality Alliance and Fitness Club. New Senior School clubs include Rocketry, Book Club, Guitar Club, Pokemon Go Club, Stocks Club and Programming Club.
In the Junior School, new clubs like Choir Club, Strategy Club, Storytelling and Adventure Club and Scratch Programming Club join classics like the Lego Challenge Club, Reach for the Top, Model Parliament Club, Art Club, and more. Because boys in Grades 3 to 6 are unable to compete in athletics, they have sports clubs twice a week, playing basketball, soccer and volleyball.
Jennifer Bonetta, Dean of Middle School Activities, is happy to see things up and running again.
“The kids feel like things are almost back to normal and it’s so nice for them to be able to engage, play and connect with teachers and each other,” she said. “We’re very much focused on Headmaster Beatty’s vision of community and connection. We’re almost where we were before the pandemic started.”
Two students in Grade 8 are really happy to experience in-person clubs for the first time after experiencing virtual clubs in their first year as Georgians last year.
“In-person clubs are way more fun because you have the social interaction and you get to hang out with your friends,” said one.
Another student in Grade 8 said “I felt like last year wasn’t as fun and only one person could talk at a time, which didn’t work as well. It didn’t feel like you were making friends. Here, it’s fun because you’re making friends.”
Grade 11 student Simon Cox has been a member of the Stand-Up Comedy Club since Grade 9 and is excited to have it running in person again.
“It worked pretty well online, but most of these clubs are better in person. It’s a very chill environment. We bounce ideas off of each other and I leave feeling like I have work to do on my routine.”
Simon, who is also helping to run the Howlander Club, has joined numerous other new clubs this year, including the Programming Club, the Web Design Club and the D&D Club.
“I’m just excited to be near other people again,” he said.
Back