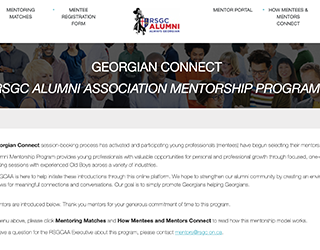 Georgian Connect: New Program Takes Mentoring to the Next Level

7/15/2021
Walking through the doors at 120 Howland can be life-transforming—and not just for current students.
Once you become a member of the school’s alumni association, the RSGCAA, you have a wealth of resources at your fingertips, including an alumni network of over 4,350 people and growing, doing all manner of interesting work in every corner of the planet.

When the association introduced its strategic plan in 2019, the top priorities were building relationships and creating value. The RSGCAA aimed to build a stronger network and community of alumni, including by inaugurating a formal mentorship program.
With Geoff Osborne ’08 leading the mentorship portfolio for several years, an informal mentorship program had been well underway and growing steadily. Now, in 2021, amidst a global pandemic, Dan Mitchell ’99 and Connor Byrne ’13 are ready to take the mentorship program to the next level. The duo, who head-up the mentorship portfolio on the RSCAA Executive, also happen to have a Mentor/Mentee relationship.
“We met through the RSGCAA. I saw him at my first meeting back in 2017 and thought he looked familiar, but then we realized we worked at the same firm,” said Connor, who ended up at his RBC role through a series of RSGC connections.
“During the three years we worked together, Connor would approach me about the different career paths at RBC and ask for advice on progressing his career,” said Dan. “As we met regularly to develop the RSGCAA mentoring program, we realized we should practice what we preach and establish a mentoring relationship of our own.”
While Dan mentored Connor to advance his career, the pair worked diligently to modernize the RSGCAA’s mentorship program. In February 2021, Georgian Connect was launched using the Mentorship Rocket platform that connects mentees to mentors. The web-based system allows mentees to search for a mentor in the industry that interests them and book a timeslot with the mentor of their choice. If they are a good fit, the mentor and mentee can develop a more lasting relationship.
When it launched, the Mentorship Rocket database quickly signed up 16 RSGC alumni mentors in various industries: education, engineering, finance, law, management consulting, medicine, real estate investment and others. Since that launch, the program has also attracted over 20 mentees.
“We want to be able to have a mentor in every industry that someone is interested in, but we’ll see where the interests lie. We can always add more mentors to meet demand. Our alumni seem to be very willing to help out,” said Connor. “We had one mentee who was keen to meet with a mechanical engineer, but didn’t see one on the list. Within the hour, we were able to secure an engineer to mentor this Georgian.”

The nice part about Mentorship Rocket for the Mentorship Committee, which also includes Ben Mason ’11, Conor Gordon ’09 and RSGC’s Marin Anderson, is that after the initial work to get the Georgian Connect program set up, it allows for a more scalable approach in which a larger number of mentors and mentees can connect.
“The great thing about the program is that it’s hands-off. What we had been doing in years prior was fielding individual requests from people in their third or fourth year of university and seeing who we could connect them with from within the Georgian community,” said Connor. “Now we have a database where Georgians can find mentors and book timeslots on their own.”
“We had previously struggled with the operational aspects of making long-lasting relationships and tracking their progress,” said Dan. “When we got a request, we found that we were always relying on our personal networks. The new model is much more fluid. By loading the system with a pool of great people in various industries, our mentees have more selection and more control over the process. Finding a mentor takes time and effort, and our aim here is to provide the right platform for some of these connections to be made.”
The software also allows the association to collect data and use it to improve the program: are people using the system? How are they using it? Does the committee need to alter its approach? All of this data will help the RSGCAA ensure that users have the best possible experience and get the most out of the program.
And while Dan and Connor no longer work together—Connor moved on to a new role at a small wealth management firm earlier in 2021—their relationship remains strong. Dan loves being a mentor and thinks it’s an important part of being a Georgian.
“We’ve got a great group of people who are alumni and, as that group grows with the addition of new RSGC grads, we are well-placed to expand the networking and mentorship that happens within our community,” said Dan. “As a fellow Georgian, I’m more than happy to take a meeting with younger alum and help them discover where they want to be and how to get there.”
As for Connor, he doesn’t think he would be where he is today without his Georgian mentoring.
“I know that it was instrumental in starting my career. You learn from others’ experiences and advice, and that is invaluable when you are at the beginning of your career,” said Connor. “Having a mentor is key, regardless of whether you’re just getting started in an industry or planning your next career move.”
Dan also believes that a mentor/mentee relationship isn’t just about those looking to start out their careers.
“I’d like to see the program transition to include entrepreneurs who want help starting a business, or new people-managers in need of leadership advice,” said Dan. “Mentorship can also be about your own path and self-improvement.”
More information on Georgian Connect can be found here.
To register as a mentor, or for questions about the program, the RSGCAA Executive Mentorship Committee can be reached at mentors@rsgc.on.ca.
Back