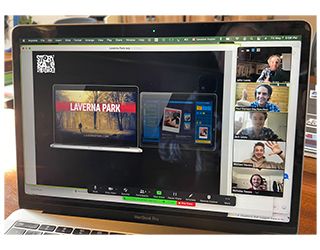 The Surprise Fluidity of Network Loops

5/12/2021
John Lacey, Father of Jack Lacey '19, writes his story about how the pandemic changed his career path, and how his son connected him with fellow members of the Georgian community to start up StoryGame Studios.
This is a story about the capacity of our personal networks to redefine and reshape themselves in new ways over time - and sometimes in very unexpected ways.
At the RSGC graduation reception in June 2019, my wife Meredith and I watched our son Jack say his goodbyes to close friends, teachers and faculty. Feeling excited, sad, accomplished and nervous all at the same time, Jack was one of the last to leave that day. He wanted to savour, one last time, the school community he felt so intensely close to and proud of since arriving in Grade 7. As we walked away, I recall telling Jack that he was a part of something very special, something that would be with him for a lifetime. What I didn’t expect was how I would remain connected as well.
Over the summer, Jack coached sailing at RCYC and in the fall, he set out on a GAP year that included trekking in the Indian Himalayas and travelling throughout South East Asia - Thailand, Cambodia, Vietnam and Malaysia. We were especially thrilled when Jack was able to coordinate meeting up with fellow RSGC classmate Finlay Gane '19, but tamped down that excitement when we learned that Jack and Finn were enroute to Northern Vietnam to travel the Ha Giang Loop...by motorbike. Jack assured us that not having any type of drivers license, from anywhere, was really not an issue.
On return to Canada, just in time before pandemic shuttering of international borders, Jack, like many, found himself in a very different world. Coming down from a travelling high, Jack was fortunate to resume his job teaching sailing and he was looking forward to attending Western University in the fall. Spending lots of time at home, Jack and I found ourselves talking frequently about entrepreneurship and new business ideas. While this was a familiar subject for us, I was looking to pivot my marketing agency, which was significantly impacted by COVID lockdowns, and Jack was a more than willing contributor.
In mid-summer, inspired by an article in Inc., I shared an idea with Jack and we worked up the concept. With years of experience building relationships between brands and people that combined live experience and digital technology, I now shifted my focus to the gaming and entertainment industry and the idea for StoryGame Studios was born.
Sharing a love of new ideas and innovation, Jack was enthusiastic and encouraging, which motivated me to seek business partners. He also offered to connect me with Dr. Paul Darvasi, one of his past teachers at RSGC, who taught a fascinating course on transmedia storytelling. While I had met Paul a few years prior, Jack facilitated connecting us and took part in the initial meetings. The synergy was immediately apparent and to this day, Paul remains an active advisor with our start-up.
As we moved from concept ideation to testing, we found ourselves needing help in content production. Overhearing that I was looking for someone to create audio voice overs, Jack connected me with Nicholas Vassos ‘20. As an entrepreneur, I have long supported creating opportunities for young people and was very open to giving Nicholas a try. Over my 25-year career, there have been very few times I have been as impressed as I was working with Nicholas. His technical skill, professionalism and attitude was nothing short of exemplary. Even with a full workload at Queen’s University, Nicholas still finds time to help us on a project when we need it.
As we all know, our network circles, from years of introductions and found common connections, start taking on their own shape and form. Looking for someone to help us with social media, I asked Nicholas if he had any suggestions. Without hesitation, he suggested his brother Michael ‘18, who was at Western University enrolled in the Media, Information & Technoculture program. After one Zoom interview with Michael, the fit was obvious and we asked him to join our team part-time to help us build our online community.
While I quip with Jack that he is paying me back for the investment we made in him at RSGC, privately I admit that I could not be more proud that he is putting into practice a life skill of tremendous value. Jack created a network loop - a group of people now connected by a new purpose. While not uncommon, creating network loops organically and instinctively is a skill unto itself and I know with certainty that the RSGC environment and community Jack had the privilege of being a part of, a community he so deeply cherished throughout his formative years, is playing a significant role.
StoryGame Studios is a Toronto based technology start-up that creates and produces entertainment.  We are crowdfunding our first title, Laverna Park, on Kickstarter in early June. To see the project Dr. Paul Darvasi, Nicholas and Michael Vassos have contributed to, visit our website at:
www.storygamestudios.com
Back