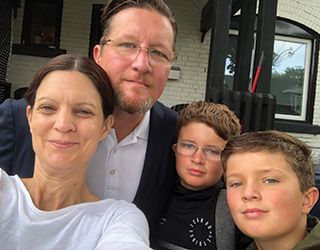 5/4/2021
Tom Corcoran is a new Georgian, having just been accepted to the College for entry to Grade 7 this fall. But when he and his parents, Anne Glover and Jeff Corcoran, went through the admissions process this past year, their experience was unlike any of the current parents and students.
They were unable to tour the campus. They were unable to meet Headmaster Beatty, teachers and students in person. They were unable to feel that Georgian “warmth” that everyone seems to feel the second they step onto campus. And yet, they still jumped at the chance to accept the offer when it came in.

“Compared to the other schools, there was more warmth and a feeling of belonging. I know my friends have said, ‘once you walk in, you’ll feel the warmth and you’ll fall in love with it’,” said Anne. “There’s nothing you can do about the fact that it was virtual, but in my world, I felt like it was a warm, inviting process.”

Anne loves that RSGC’s values match the way she and Jeff are raising their two boys.

“We try to teach our kids to be good people. Everything about RSGC – making a well-rounded boy, being good members of society – that’s what we’ve been trying to do with these children,” said Anne. “It all kind of jived.”

Both Anne and Jeff, who live in the Annex, wanted to show their interest in the school, so they took part in as many virtual Open Houses, information sessions and Q&As as they could. Tom was very active and engaged as well, especially when current students were talking.

With most things in today’s world having switched to virtual and the Corcoran family not knowing what the usual admissions process looked like, they were pleased with the impression they were able to get of the school.

“The school leaves you with good feelings – the people, getting to know the staff, the Open Houses. You just get a sense of who they are,” said Jeff. “The remote aspect and seeing people in their own homes was also interesting in its own way.”

“One of the things about Zoom and Google Meets is that there’s more of an openness to people,” added Anne. “We got to see Mr. Beatty and the teachers as human beings. Mr. Beatty kept saying ‘thank you for letting us into your homes’, but they were letting us into theirs. From a parent perspective, I really felt like I got to know people and they got to know us.”
Back