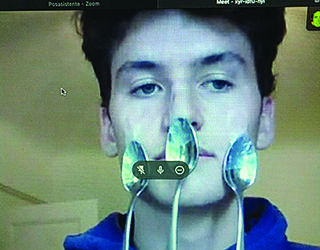 10/8/2020
The Grade 9 Outdoor Ed trip that usually kicks off the new school year went virtual this year, with Alive Outdoors running a two-day program called Connectival.
The boys were put into small cohorts, working together as a team to fulfill challenges and missions. The goal was to connect students to each other and the RSGC community.

“Obviously it couldn’t be the same as camp, but if you don’t compare it to that, it worked like a charm,” said Mr. Enfield. “The boys were still able to work as a team and we still had Grade 12 leaders, which allowed the younger boys to befriend an older boy – much more difficult now that we’re in separate cohorts.”

Grade 12 student Paolo Bizzarri, who has previously acted as a leader on several outdoor ed trips, enjoyed his experience as a Connectival leader and continues to love his role as a leader despite the drastic change.

“I love interacting with the younger kids. The Grade 9s look up to the leaders and I take that responsibility very seriously,” said Paolo. “The outdoor ed leader sets the tone for how these boys are going to experience the rest of the year. I want them to be excited and fully immersed in the community. I want to show them what it means to be a Georgian and help shape them to be their best self.”