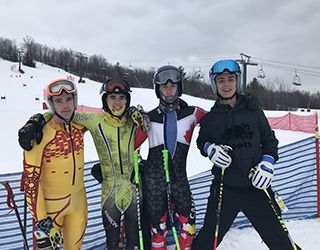 Success on the Slopes

3/6/2020
RSGC has added some hardware to its ski and snowboard collections after a successful season on the slopes.
The ski team won the CISAA championships in the Open division, with Grade 12 student Oleksa Mojsiak setting the pace. He came in first in four out of five races and picked up two silver medals at OFSAA. The OFSAA team, which also included Ben Dreger, Devin Chapple, Ben Losty and Michael Keene, finished sixth in Slalom and fifth in Giant Slalom in the Open Division at OFSAA.

Coach Julie Girvan, who has been coaching the ski team with Ashleigh Gledhill since 2006, was pleased to see the boys’ efforts pay off. She knows it is a big time commitment for them, both academically and physically – especially since all of them compete or coach outside of school.
“I’m very proud of their commitment and how well we’ve done. To finish fifth and sixth in the province is amazing and Oleksa’s results were pretty outstanding,” said Ms. Girvan. “These guys, especially those who came to OFSAA, give the team a very big time commitment. They work hard and miss many days of school throughout the season. We sometimes have guys doing homework at the hill and often on the bus on the way home from races.”
The U14 ski team, coached by Kate Hubbs, also won the CISAA championships.

In snowboarding, despite a third-place finish as a team at CISAA, three boys qualified for OFSAA individually, with Grade 11 student Andrew Behan capturing the gold medal in the Open Division.
Coaches Michelle Bader-Shaw and Cathie Gryfe-Seeley, who have also been coaching the team together for several years, were pleased to see the team’s progress.

“It’s a dedicated group of boys and we’ve seen a lot of improvement from our snowboarders,” said Ms. Gryfe-Seeley. “Luis Keesmaat-Freeman in Grade 9 missed the podium by .17 seconds in the Open Divison and Jacob Reil finished 16th overall in the High School Division.”

It looks like we can expect RSGC’s success on the slopes to continue in the years to come!
Back