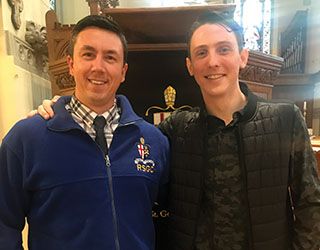 2/11/2020
Just over a year after losing his close friend Patrick Coffey ’12, Jamie Cardy ’12 came back to his high school to speak to his fellow Georgians. It’s not an easy message to share, but he doesn’t want history to repeat itself.
Jamie took a difficult path after graduating from RSGC, thanks to some poor choices when it came to drugs and alcohol. He wants to make sure that today’s Georgians don’t make the same mistakes, and he strongly believes that knowledge is power.

“RSGC is one of the greatest, most supportive communities I’ve ever been a part of and we are so strong in so many ways, but one of the things that there may be a gap in knowledge for is substance abuse and addiction, which is very much a mental illness,” said Jamie. “People need to be aware of the risks of leading certain lifestyles. If you have the knowledge before, you can avoid those situations. I want to make sure that our Georgians have that knowledge because if they do, they’ll be equipped to take on the battles.”

It was at Patrick’s funeral that Jamie reached out to Mr. Beatty to see if there was a way that he could share his story with the students in the school.

“I am so proud of the man Jamie has become and I was so grateful that he was willing to share his story with our current Georgians,” said Headmaster Beatty.

Senior School Social Worker Andrea Kaye also invited Jamie back during Mental Health Week to have a longer discussion with boys who wanted to hear more of his story and ask him questions.
Jamie was happy to give back to RSGC and hopes his message can help with the choices the boys are faced with.

Jamie’s struggle with substance abuse came after RSGC, when he was exposed to numerous substances that got the best of him. It was after hitting rock bottom that he realized he was ready to make a change. Now that he has been clean for two years, he has this important message to share with his younger counterparts.

“Know the risks and be ready. Not every one of you is going to be put in vulnerable situations where you’re going to have to make key decisions like this, but some of you will and those decisions will affect you for the rest of your life,” said Jamie.
Back