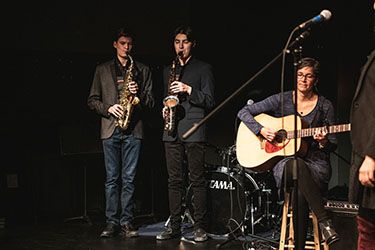 2/3/2020
The 10th annual Hidden Gems concert on January 30 impressed the crowd, as always.
The celebratory event highlighted the musical, theatrical and artistic talents of our RSGC community including students, parents and staff.

There were two sold-out shows - a matinee and an evening performance. All proceeds supported the Georgian Scholarship for the Arts.

Headmaster Stephen Beatty ’86 can’t say enough about Hidden Gems and why it is so important.

"I can't imagine anything that captures our amazing school and community better than Hidden Gems. It’s the faculty. It’s the staff. It’s the parents. It’s the boys. It’s the courage of everyone and the fact that they are so cherished for who they are. It challenges them to be the best version of themselves."
Hidden Gems was founded by alumni parent, former Board Member and accomplished jazz singer Molly Johnson. Hidden Gems has helped raise over $161,000 for the Georgian Scholarship for the Arts.
Back