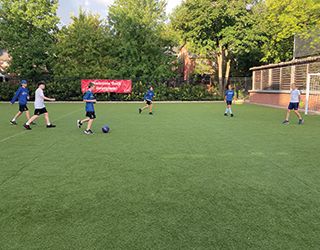 Athletics: Back on Course

10/13/2021
Middle and High School students have begun some sort of normal team training with the plan to start competition in an adapted, reduced schedule CISAA league the week of October 4.
Tryouts ran for longer than usual and teams are set for both soccer and volleyball. While Athletics Director Steve Turner has been busy getting things up and running, he’s looking forward to the boys being able to compete again after such a long break.
“We had the goal of running a longer than normal tryout period and keeping larger rosters wherever possible so that we can give an athletic experience to more people,” said Mr. Turner. “We’re trying to give them additional opportunities in order to adapt to the fact that many of them haven’t had a competitive sporting environment in the past 18 months.”
Mr. Turner has been working closely with the other Athletics Directors, continually providing feedback on CISAA’s Return to Play plan. He and the school feel confident that the students can compete in a safe and positive environment. The team cohorts will remain the same as they are on campus, including transportation.
“We have even adapted our bus requests to ensure that it’s only a single cohort going to a single location – we’ll never have multiple cohorts going together,” said Mr. Turner. “With a few scheduling changes, we’ll be able to ensure that cohorts are travelling together and staying in cohorted environments.”
Of course, the teams the Knights play against will be in different cohorts; however, the Return to Sport plan put together by the Covid Task Force has ensured that anyone who is competing will be double vaccinated or have followed a complete screening process, which would include a rapid testing process, where available.
Most importantly, the kids are back to some semblance of normalcy.
“The boys are very excited to be back on the floor with their peers and back into an environment where they get to represent the school,” said Mr. Turner. “The general feeling is excitement without much hesitation.”
Grade 12 student Ben Galarce has been playing volleyball at the College since he started in Grade 7. After having missed competing for the Knights for over 18 months, he’s looking forward to playing in his last year with the team.
“I think it’s great that we as Grade 12s on the team have one final chance to represent the College in a way that students last year didn’t get to,” said Ben. “It’s a great way to interact with the students below us who we didn’t get to see at all last year.”
Back