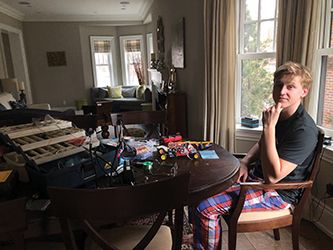 4/22/2021
With the Design Engineering Studio (DES) now being used as a Grade 8 classroom, Chris D’Arcy’s ACES program has been fully online for an entire year.
While this might seem like an odd choice given the hands-on nature of the program and the parts and tools required, it has been an easy transition for both students and teacher.

“My logic has always been engineering as a broad area. I’m focused on the individual boy, his toolbox and the projects he’s working on, not the team concept. It’s far easier to develop a particular boy’s passion when he’s working individually or on rare occasions with a partner. That has been my traditional philosophy for decades,” said Mr. D’Arcy. “The fundamental nature of the way ACES program is designed allowed us to pivot relatively easily. We still had the boy and his toolbox at his workbench at home.”

Mr. D’Arcy says a perk of being at home is not having to lug projects back at forth between home and school – he and his students can simply lay whatever they’re working on in their work space and leave them there. Grade 12 student Paolo Bizzarri has been working on a line-following robot for the past two months and agrees that it’s an upside not to move the heavy item from home to school and back.

As far as parts go, Mr. D’Arcy has done a lot of planning and organizing to ensure that the boys always have the parts they need to get their work done.

“I took my best shot at putting stuff into their toolkits last summer, but if they don’t have something for the next unit, I’ll order what they need, send it to the school and have JC and his team deliver it to the boys in their pods,” said Mr. D’Arcy. “If that’s not possible, my wife and I have driven around the city a few times and dropped stuff off on doorsteps.”

And while the Grade 10, 11 and 12 classes have transitioned seamlessly to online, both Mr. D’Arcy and Paolo agree that there’s no replacement for the physical DES.

“I think the Senior boys in particular miss the culture of the DES where you had a TA in there every day helping the younger boys – the sense of fraternity, a second set of eyes,” said Mr. D’Arcy. “To a Grade 10 or 11 student, having a Grade 12 boy show that kind of interest is really empowering and life altering when their slightly older peers throw their weight behind a slightly younger boy.”

Paolo also misses that camaraderie and the environment of the DES.

“Working with the younger and older students, helping each other out – everyone is working towards a common goal,” said Paolo. “The DES is a very unique and special place and it’s hard to replicate, but I don’t think Darcy could have done a better job.”
Back